Talk with other Shiloh Sharps shooters.

Either the 45 degree angle is incorrect or the 0.075" transition step length is too long. The 45 degree step in my Sharps is only 0.013" long.
Wayne
NRA Life (Benefactor & President's Council) Member, TSRA Life Member, NSSF Member, Author & Publisher of the Browning BPCR book
http://www.texas-mac.com
Top

...This is reading like an advanced science class now

.. Too much choice... too many decisions. It seems that, within reason at least, regardless of the chamber, transition and lead one has in their rifle...if they load to those parameters, the chances are one will have a respectable result. I've had a 45/110 Shiloh with their standard chamber...which is typically nice and tight anyway ..and shot bore diameter paper patch bullets without issue. Initially I had a few paper rings but once I had longer brass and had done a little more homework those went away and yes, accuracy was fine. When I ordered my 44 x 2 1/4" I was seriously considering opting for the traditional paper patch only chamber but I just couldnt make myself commit to it. Around that time I believe, Shiloh had ordered a tight spec reamer with the 7 degree transition and after some discussion.. decided to go with that option. As previously stated, it has performed flawlessly with both paper patch and grease groove and as a result is my 'go to' rifle. This was all before I started with the dual diameter paper patch route which I'm trying now. This has the added benefit of not needing to overwork the brass to get
a snug slip fit. I had been running dual diameter grease groove beforehand ..also with good results. While I acknowledge Jims reference to the taper coming from the outside of the case possibly being an issue, I've not seen it manifest itself as a problem in either of the two rifles I have so chambered. I'm also quite sure if I went with the standard Shiloh chamber with the more abrupt chamber end/ transition, when loaded to suit, I'd have no problems either. So you have the original spec Sharps chamber for pp only, the 7 degree transition ..still in a tight chamber and the 'standard' possibly 45 degree chamber stop...to a 2-3 degree leade. Seems like a win, win or win scenario. They all work...its just that one of the three means bore diameter pp only.
rgds
J.B.
"an experimental weapon..with experimental ammunition ? ...Lets experiment "
Top

wayne,
just goes to show, don't believe everything you read until you ask the questions.
roughly how long would the step be with a 12 degree transition?
bruce.
ventum est amicus meus
Top

Google is your friend !! everything is just plug and play now. 45* was the easiest before.
www.quigleymatch.com/local-matches.html
Top

bruce m wrote: ↑
Fri Apr 16, 2021 4:34 pm
wayne,
just goes to show, don't believe everything you read until you ask the questions.
roughly how long would the step be with a 12 degree transition?
bruce.

Here’s the trig formula & calculation for a 12 degree transition step. For a different angle go to an online tangent calculator such as https://www.rapidtables.com/calc/math/T ... lator.html and plug in the angle. BTW, for a 45 degree angle the tangent is equal to 1.0. Therefore the step would be 0.0125" wide 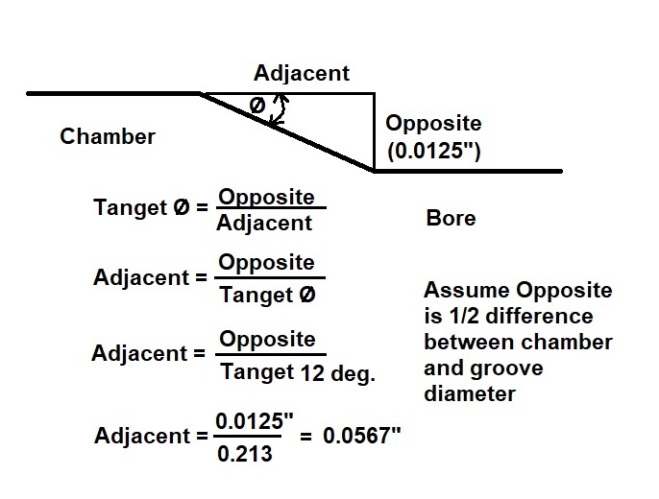 Give me a day or two guys and I'll turn a 12 degree angle on a piece of steel in my lathe from end of neck (45-70 reamer diameter) to bore diameter and post a picture of it.
Top

BTW, it's spelled tangent not tanget. I'm reasonably good at math. or trig. but a poor speller.

So following is a corrected illustration. 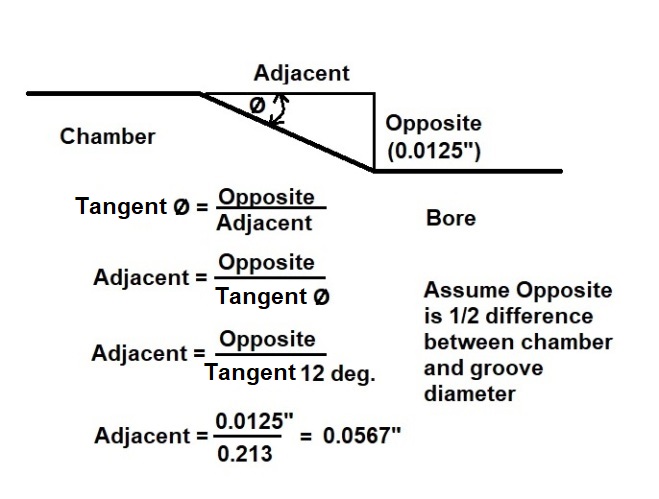 So, referring to the previously listed trapdoor transition step length of 0.075", would mean the step angle is approximately 9.5 degrees, give or take .5 degrees or so depending on the difference between the chamber and groove diameters.

Here are all the dimensions of the trapdoor chamber. From print.

Chamber length to transition 2.035 from front of rim ledge.

So, I guess with all this theory about the superiority of the 7°leade, I only have a few questions.

How Many National Championships has this super chamber won?

A standard Shiloh Chamber can win National Scope titles, with a grease groove bullet, the same chamber can win Scope Titles with a PP bullet in Creedmoor and Midrange. It can win Winter National scope titles, same gun did that in 2013 at Phoenix and at Raton.


Kenny Wasserburger
You do not have the required permissions to view the files attached to this post.
We'll raise up our Glasses against Evil Forces, Singing, Whiskey for my men, Beer for my horses.

Chamber length to transition 2.035 from front of rim ledge.

TexasMac wrote: ↑
Fri Apr 16, 2021 7:23 pm
So, referring to the previously listed trapdoor transition step length of 0.075", would mean the step angle is approximately 9.5 degrees, give or take .5 degrees or so depending on the difference between the chamber and groove diameters.

the plot thickens.
maybe 12ish degrees is max spec and a bit lower is acceptable.
or trapdoor chambers were more generous, giving an opposite of greater than 0.0125".
bruce.
ventum est amicus meus
Top 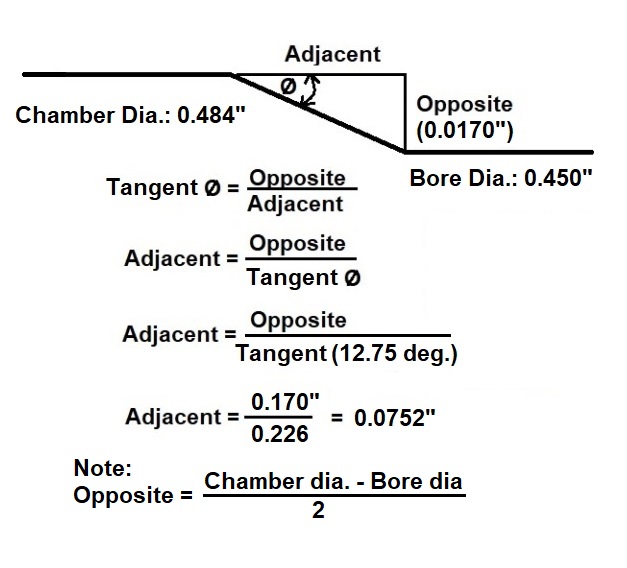 BTW, my earlier comment that the transition step angle in Browning BPCRs is 12.5 degrees is a typo. It's actually 12.75 degrees, the same as in the Springfield trapdoors.

Return to “Shooter to Shooter”