In 1883 the NRA(UK) banned cleaning between shots. The proliferation of cleaning between shots was seen by the NRA(UK) as a move away from a practically useful direction. The ban was to encouage the use of powders which would produce less fouling, though with sharper explosion. One consequence of the ban was a move to many using blow tubes. The earliest advertising I have found in the UK is 1884, ie. the year after the NRA(UK) prohibited cleaning. One device was patented in 1884 and I have seen advertising for others. 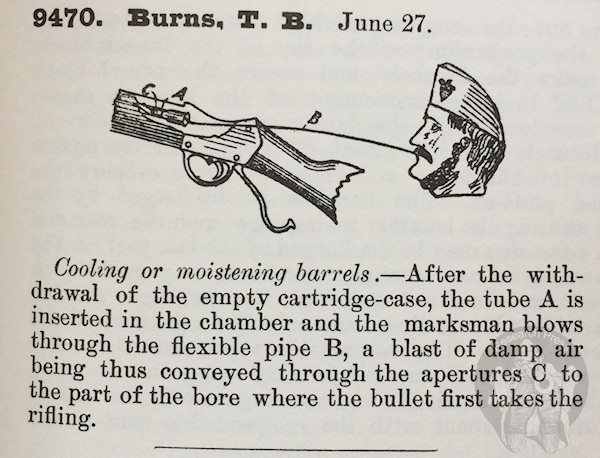 This from 1885 - "BURNS' BARREL-COOLER. - In this little instrument, which is manufactured by Messrs. Cogswell and Harrison, of the Strand, the jets of breath are directed to the very spot where the fouling accumulates and hardens—viz., at the spot where the bullet takes the rifling, that being the most important part for the reason that if the bullet has not correctly taken the grooving of the barrel a bad result must follow. The barrel itself is also cool and moist throughout the shooting, even in the hottest weather." 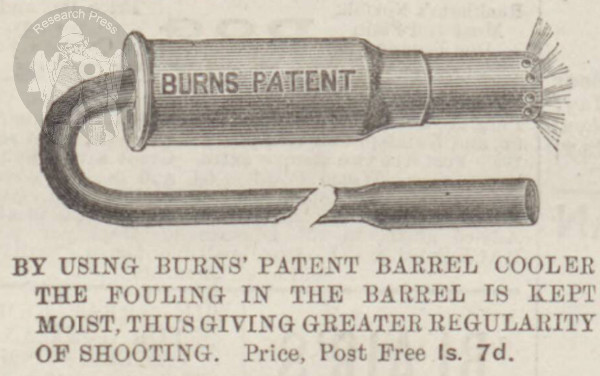 In letter published in the Volunteer Service Gazette in January 1885 an author notes "I have used a home-made one consisting of a piece of glass tubing passed through a cork, which fits the chamber of the rifle, and a piece of rubber tubing to blow through."

Has anyone charted similar documentation in the US?

Thanks David! That is very cool.

This is the first I have ever heard of this.
Gary
"Hav'n you along, is like loose'n two good men"
Top

David, thank you for sharing, very informative. I love to see these old ads and articles from this period.

Definitely a lot more interesting than Glocks. Thanks for the post
Top

these must be some of the things gert has described several times.
it is good to see an actual picture.
this post plusrecently reading sir henry halford's book have filled in a fair bit of the brit cartridge rifle jigsaw with regards their shooting dirty.
i am inclined to ask the question regarding average, max, and min humidity expected in britain relative to my own mediterranian climate, and the climate of zack taylor.
also relative humidity in the eastern states of u.s.a.
keep safe,
bruce.
ventum est amicus meus
Top

Rejoice, our long lost Little Black Duck has resurfaced. Good to have you back Bruce. Feared you had fallen prey to a Great White Shark.

Here is some food for thought: Climate Change does happen during a match, during a course of fire even, depending on how you think. It has nothing to do with global warming but has everything to do with internal barrel heating, radiant heating and available moisture in the air. (I suspect rate of fire also has an effect but the other three are larger detriments)

Working from the assumption that hard fouling is a nemesis to accurate shooting with the black powder cartridge rifle we can move forward from there. The introduction of moisture into the barrel through blow tube mitigates hard fouling by introducing breath moisture into the bore. As the breath moves down an increasingly heated bore it looses some of that moisturizing effect. Same for a wet patch, the most moisture introduced is at the chamber end and the least at the muzzle end. The higher the internal temperature of the barrel the more noticeable the effect on accuracy due to lack of moisture available in the bore.

Does shooting on an overcast day diminish radiant heating. On overcast days would not the humidity at ground level have a longer duration than on a bright sunny day?

Jumping forward, then doesn't it make sense to have as nearly the same internal bore condition from the first sighter shot through the fifteenth record shot?

And, isn't the only way to do that is overcome all accuracy diminishing elements regardless of the changing conditions?

the little black duck could be lurking at any time

David, don't know where you find all these great illustrations and articles but sure enjoy looking & reading them
Regards
John
Top

Thanks for the feedback - glad to see it's not just me that finds these forgotten / lost items interesting!

Here's a scarce picture from 1896 of a Wimbledon rifleman using a blow tube for fouling control. 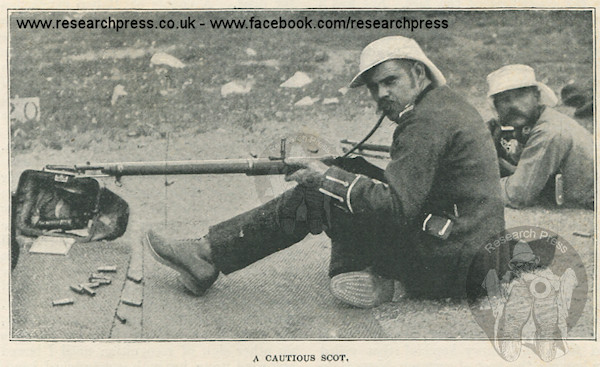 his body position suggests he might be shooting supine.
has just sat up, and is blowtubing then.
not sure if there was an event for that type of rifle which allowed supine?
the guy behind looks to be belly down.
keep safe,
bruce.
ventum est amicus meus
Top

Bruce, judging by the direction of the muzzle of the other shooter, I'd doubt he is shooting supine. Muzzle discipline might be an issue though

Excuse the typo, but the picture above is from Bisley 1896, not Wimbledon!

He has his ladder sight up on the barrel. I doubt he would use that Supine. Cant see if there is one on the butt. Still, be interesting to know if Martinis had one.
Top

I remember seeing a picture of Springfield Armory employee Freeman R Bull with a blow tube hung from his neck back in the Trapdoor days. He was a machinest and match sight inventor for the Trapdoor Long range rifles. I just wish I could remember where I saw this photo.