How well do these work dispensing wet patches? Never used one before. Thanks for the help!
Colton Fleetwood
NMLRA Board of Directors
Top

Very well. If you need wet and dry patches (as many do for long range matches), then you can order a double barreled version.

How and where Brent ? Tired of fighting with the tupper ware and the wind.

How and wear to get one? You need to contact Paul Huard. With luck, he is watching this. Goes by Monzingo Or something like that. My spelling is always suspect. I'll poke him.

Got him. He'll probably send you a note soon.
Top

He sent me his number, and I called and had a pleasant conversation with him, and ordered a double, with patches.

Dose he sell to as nyone?
Top

Grump's comments about being tired of fighting the wind and tupperware is pretty funny because that's what inspired Poppers.

We were down in Phoenix for a long range match in about 2011 and I was shooting at 900 yds. I had my patches in ziplocks with rocks holding them down. But the wind came in over my right shoulder and squirreled (like whirled, only more so), into that bag and blew my old Arsenal patches out clean as a whistle and they exploded into a minor blizzard 20 yds down range. I was shooting like crap and, like most of us, sick as a dog. But that was the final straw to a bad day.

That night back in Al's trailer, Paul was showing me these really interesting little gizmos that were evolved from cigarette rollers that he had for wrapping bullets. Kinda cool and Paul likes to invent stuff, but I was still pissed about my patches, so I told him these gagets were fine but I, personally, needed something to dispense patches one at a time that doesn't blow all over Kingdom Come.

Paul said, "No problem. I'll have a prototype in your mail box in 2 weeks." And he did. Blew me away. I'm still using that prototype too. Best BPCR/TR tool of all time.
Top

So do you use Paul's tool for wrapping your paper patch bullets ?
Top

No. I still to it by hand. The tool is cool and with practice, it might be faster, but I find my hand wrapping to be therapeutic.
Top

Did I read somewhere on here that you made up some sort of shooting station around one of these patch poppers? If so, would you kindly post a picture?

Thanks for all of the help!
Colton Fleetwood
NMLRA Board of Directors
Top

I have two. This one is for BPTR where I often use 2 wet, one dry between shots. The block holds 10 rounds and some ear plugs and a place for your OBI. The timer is held on by a magnet, but I have to say, it turns out to not be so functional that way. Bullets and patches are on my right but the timer needs to be on my left. 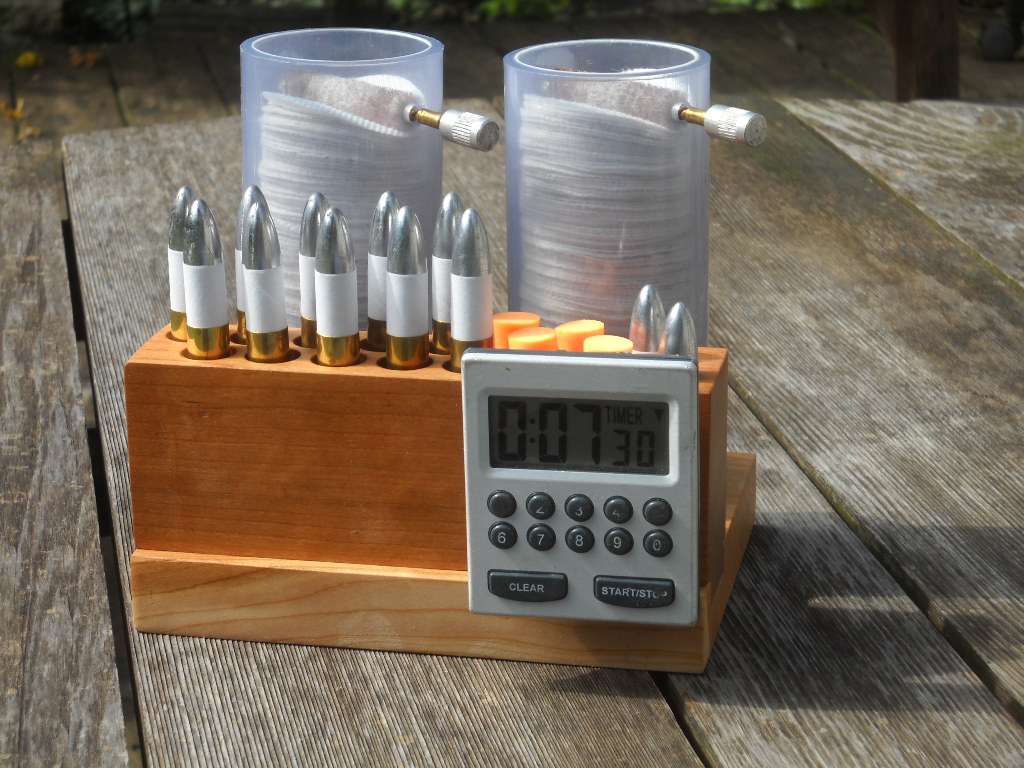 I have a similar single-barrel version that I use for BPCR where I push a bore gopher through with a dry patch.
Top

Brent could you post a picture from the popper side of our set-up? It looks like just the ticket, for BPCR and BPTR matches.


Oh and those are some "pretty" bullets.
Top

How about this GB
You do not have the required permissions to view the files attached to this post.
Top
Post Reply
36 posts