Texas firearm deer season opened this past weekend (archery opened last month) & I finally managed to get a nice doe with a .50 cal. muzzle loader using a 177gr round ball and 90grs of some old Goex FFFg. She was about 70yds away. So now I can scratch that off my “bucket list” and hang the old “Hawken’s” back up on the wall above the fireplace mantel. My next goal is to shoot one with a handgun. BTW, I hit her in the right rib cage behind the front shoulder & the bullet exited just in front of the left hip so no meat was destroyed. I believe the bullet was deflected by the rib bones since she was not standing broad side when I shot.

One potential problem when using a muzzle loader is, due to all the white smoke from the black powder, I could not tell if I hit her and had no idea what direction she ran afterwards, but got lucky and found her about 75yds deep in the woods from where she was shot. Another potential problem is even soft pure lead cast bullets will not expand to create a large exit wound. So unless hit in the head or spine a deer will tend to run a long distance and there’s little or no blood trail to follow. Although the pure lead round ball shattered a rib bone upon entry it apparently did not expand at all. The entry and exit holes were the same size. There was no blood trail to follow and the deer did not bleed out where it laid down and died. All the blood was pooled in the chest & body cavity when I field dressed it. I bet back in the days when muzzle loaders were the main firearm there was a lot of injured or dead game left in the woods. 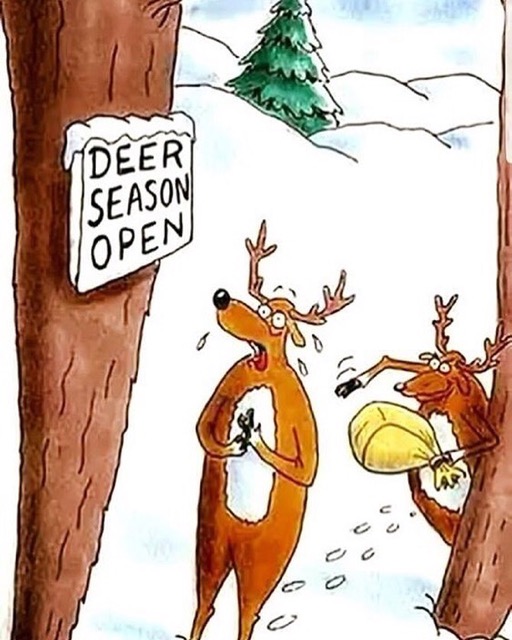 Oh, and I forgot to include a link to the official deer hunting song for your enjoyment.

Wayne - you did much better than I did. John & I were about 100yd inside the gate to the RBGC Saturday morning around 7 a.m. (just before sunrise) when a nice 7-pt buck ran out of the ditch and into the right side of my car. Inflected $3300 worth of damage to my front fender, hood and passenger door. Broke its back and once John had recovered from the "surprise" at his window he got out and put a 370gr 40cal bullet into it to end its misery. Ended up being venison for the target setters for the 2-day SE Regional match. Would rather get my deer in a less expensive fashion.
Glenn
Top

I've shot the vast majority of my big game with muzzle loaders. Haven't listened to the Yupper's in many years. The wife is from Escanaba and was smiling over my shoulder.

Woody
Richard A. Wood
If you are surrounded. You are in a target rich environment.
Top

Wayne, I've not always had the same results as you. I've had some pass thrus with soft round balls but ones I've recovered generally hit bone and flattened considerably. A 50 caliber ball flattened to about the diameter of a quarter. I had to trail one in the snow that was a pass thru and she left a good blood trail. She only went about 200 yards. I've only lost one with a muzzle loader and it was late evening and a flintlock. At the shot I was blinded for a few seconds and then with the smoke I never saw where the deer went. I looked for a long time and never found a blood trail or deer. I found it several days later dead and partly eaten by coyotes.

One shot with a 45 caliber flintlock was a quartering shot that only got one lung and exited in front of the opposite hip. That deer only went about 100 yards. I did not see it fall but I knew it did because I heard it in the leaves. I walked straight to it and it was dead when I got there.
"Perfection consists not so much in doing extraordinary things as in doing ordinary things extraordinarily well"
Top
Post Reply
5 posts • Page 1 of 1