Bob, just had a long post, went to send and took too long and had to sign back in and lost my post! Will type more later. But in answer to your question, I don't recall any drop like a rock on impact on American bison that were not CNS or brain shots. And that includes all BPCR and modern guns, including .416 Rigby , .470 Nitro Express Double Merkel, .500 H&H, and Krieghoff .500 Nitro Express double. Shot placement as I always told my hunters was the most important thing, regardless of cal. or bullets used. Yea, I got to shoot all those too.

Kurt wrote: ↑
Tue Feb 19, 2019 7:57 pm
The one I shot in North Dakota with the .44-90 bn went less than 100 yards with one shot before he folded up. I think you need a brain shot on Bison for him to drop on impact. The second one using the .44-77 took two shots that hit less than 3" apart through the lung and the last one with the .44-77 took two through the lung and a put down behind the ear that made him drop like a rock on impact. They are a tough critter.

Thank you Kurt for the clarification! I stand corrected. Nothing like hearing it straight from the one involved!

How is your rotator cuff?

I am currently in PT after rotator cuff surgery

Why am I not surprised? I think I need one for each shoulder. Can hardly sleep anymore.

Honestly, I don't really think recoil causes it. But it probably doesn't help.

Kurt Altenburg 2015 buff 013 by Kurt, on Flickr
The reason a dog has so many friends is because he wags his tail instead of his tongue.

Here are the three holes on the far side out. All passed through.

IMG_2508 by Kurt, on Flickr
The reason a dog has so many friends is because he wags his tail instead of his tongue.

Great video Kurt. I stuck around for the processing of mine too, guy can learn a lot about buffalo anatomy by watching the skinning and carcass splitting. Rick told me the heart lays way low on the inside of the breast bone but there is nothing like seeing it with your own eyes for reference on the next one. On my last cow , I shot her with a 500 gr round nose flat point patched to groove in my 50-140 with 140 grs of Fg bp. at over 1500 fps. At 99 yds lazered I had a quartering going away to the left shot. My bullet hit her about 3" behind the last rib on the left side, it penetrated thru the stomach,liver, diaphragm, lungs across the heart exiting the ribcage about 4 ribs back from the frt right side and ended up in the muscle on the right frt leg. That's 4-5' of buffalo. She made 3-4 steps stopped and started swaying ,then went down. No time or opportunity for a second shot as the herd closed around her. No one really ever has the exact same shot as the other guy gets. My point was and still is that short of CNS or brain shot, you don't knock them down at impact. bobw
bobw
Top

Bob, the same holds true for all other things as well
Top

Bob I tend to hold, if I can see it, on the light spot where the elbow rubs and just a little lower but I tend to hold a little high because I don't know how much hair is below the chest.
If I ever do it again and Carol has been mentioning for me to find another, it will be a brain shot to put him down fast.
The reason a dog has so many friends is because he wags his tail instead of his tongue.

Brent your probably right but I've made a few bang flops with modern cartridges on deer and antelope that were not from CNS or brain shots. Kurt, Carolyn is very bright, maybe you need to listen to her harder. One learns fast with positive experience and the thing I learned the fastest on getting a buffalo and putting it in the freezer for consumption is that you only pull out 1 pkg at a time for your consumption and invite who you want to partake in the meal, everyone else can go to the store and pay COLD hard cash for their own buffalo meat. bob
bobw
Top

bobw wrote: ↑
Thu Feb 21, 2019 10:32 am
Brent your probably right but I've made a few bang flops with modern cartridges on deer and antelope that were not from CNS or brain shots. Kurt, Carolyn is very bright, maybe you need to listen to her harder. One learns fast with positive experience and the thing I learned the fastest on getting a buffalo and putting it in the freezer for consumption is that you only pull out 1 pkg at a time for your consumption and invite who you want to partake in the meal, everyone else can go to the store and pay COLD hard cash for their own buffalo meat. bob


Oh sure, bang flops happen, but on the next animal, similar shot, similar conditions, and it's not a bang flop. Only a CNS is bang flop every time - except, well there was this one ram lamb that I shot in the head with a .22 and...

The best bang flop I ever had was a small buck at a dozen yards or so with a patched roundball from a .54 flinter. But I have made similar shots and not had that effect. I never count on a bf, but I appreciate them when they happen.
Top

I shot bucks on a full run that someone spooked with the .58 Hawken that rolled summersaults and never twitched when they stopped rolling.
Shot one big 280 lb field dressed buck high through the shoulder blades that flopped like a rock sideways and never moved, spine shot.
Deer fall easier than Bisons.
The reason a dog has so many friends is because he wags his tail instead of his tongue.

My first buffalo was shot with a 50-90 Shiloh and a 550 grain bullet with a big meplat. I hit him in the lungs and he did not react at all. It was just like the buffalo hunters would talk about - the buffalo would "get sick" and just stand there. At first I thought I must have missed him. Then I saw a lot of blood from the nose and mouth. The two bulls with him finally let me get another shot, this time from the opposite side. My bull had turned around from the the other bulls butting him and trying to get him to rejoin the herd. After the second shot, he sat down and then rolled over and died. Never did jump or run. Both bullets hit the offside front leg bone on the way through. The owner where I went the second time insisted that I shoot the bull in the head because a couple of other times clients had screwed up the shot (with smokeless rifles!) and the bull came after them and almost got the guide. So I shot him in the head, and this one went straight down. I think the owner was happier than I was. Also a 50-90 but this time a 16# bull barrelled one I had Shiloh build to look exactly like the originals. Worked like them too.
Top

This is BobW with big cow taken with his 50-140. Diagonal quartering away shot through heart. 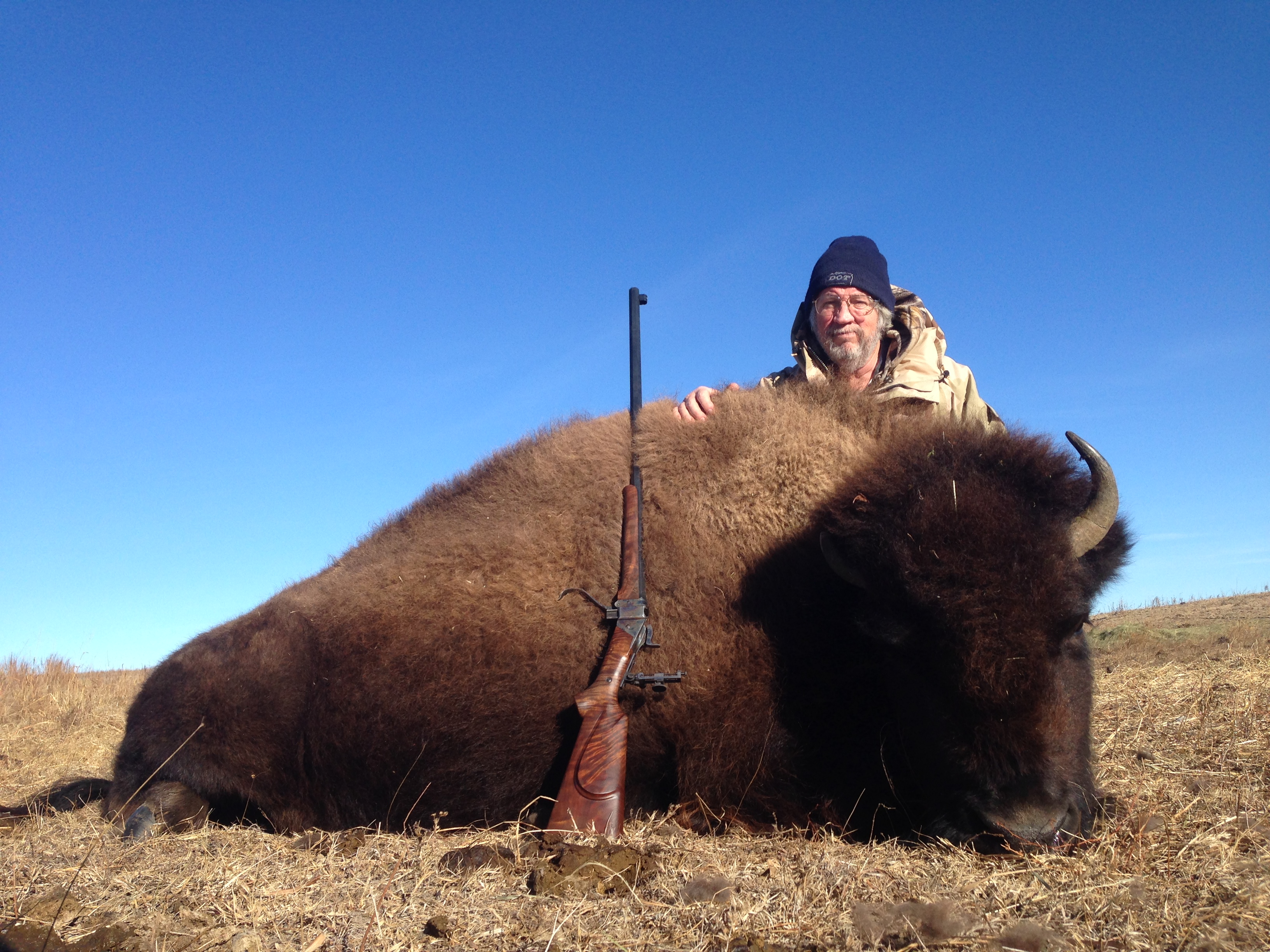 This is the .50 PP bullet recovered alongside an unfired one 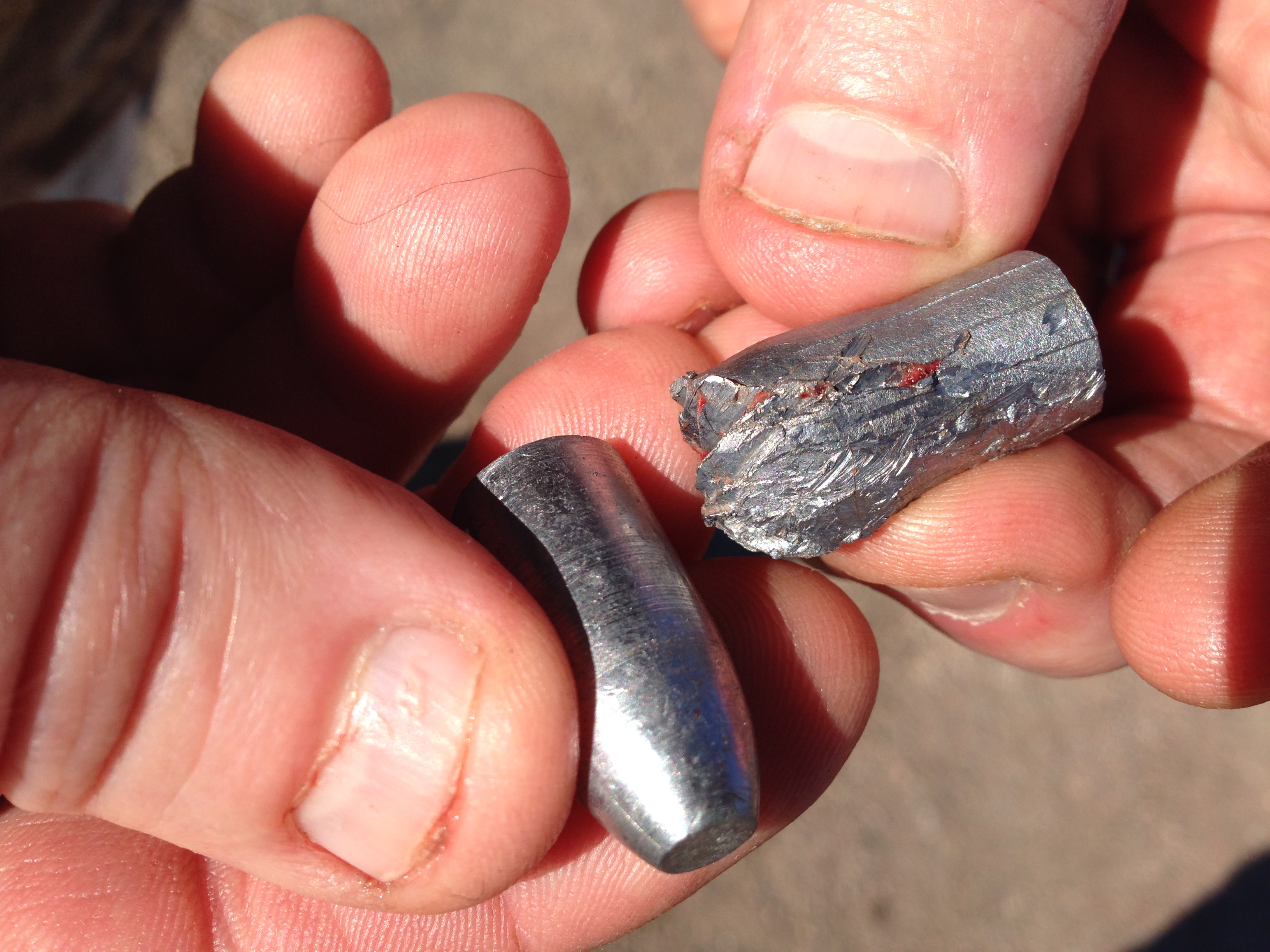 This is the video of Bob's shot showing impact of bullet. Herds bunch when they sense danger and getting one to isolate is one of the toughest parts. Plus laying on frozen sand in January with wind blowing adds to fun:) 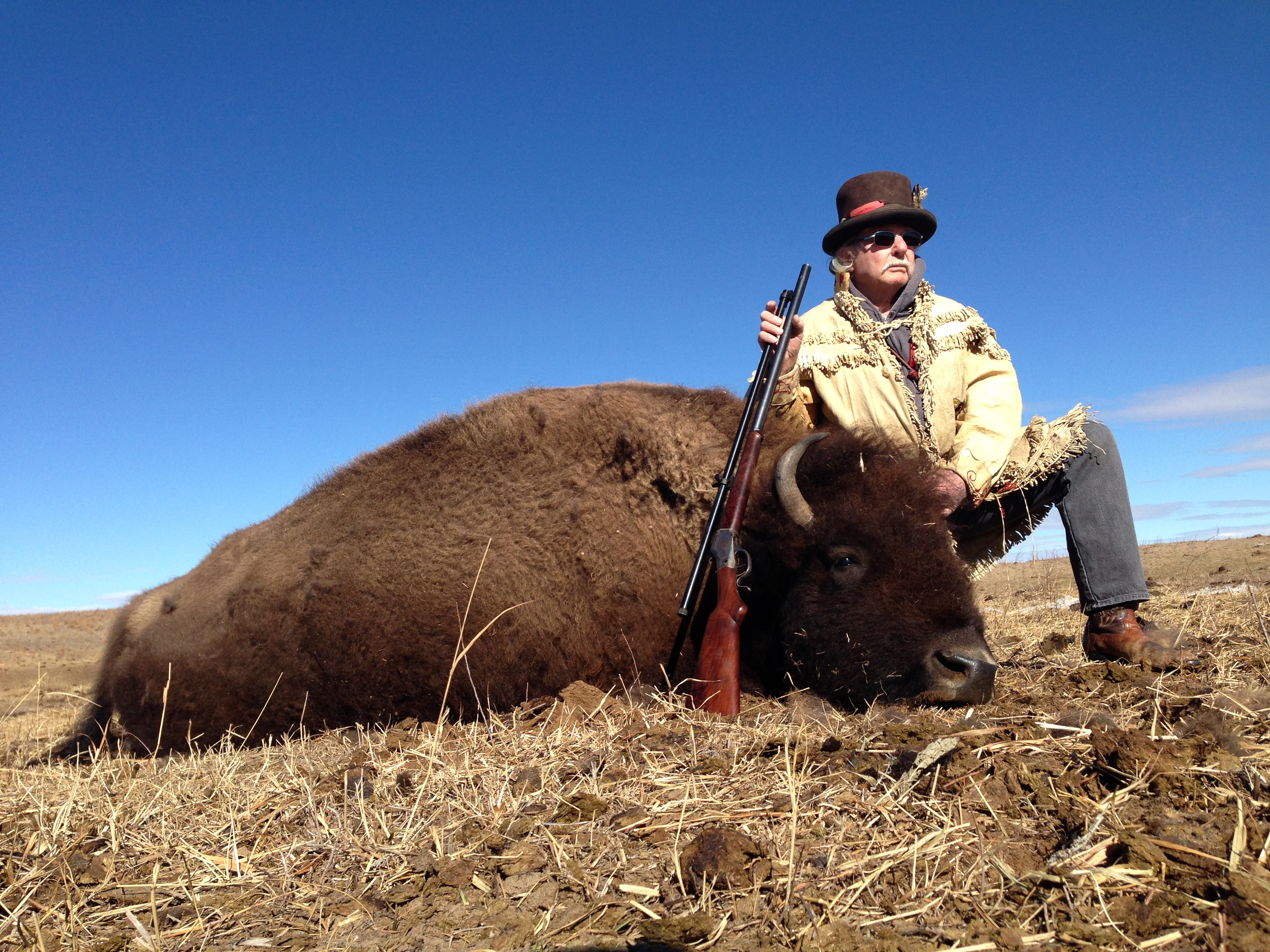 This is the recovered bullet. This shot was identical to Bob's at the same distance. Went through heart and stopped just before exiting. Bullet travel was same direction, traveled same distance through critter, both critters were down after three steps. Both animals reacted similarly upon bullet impact. 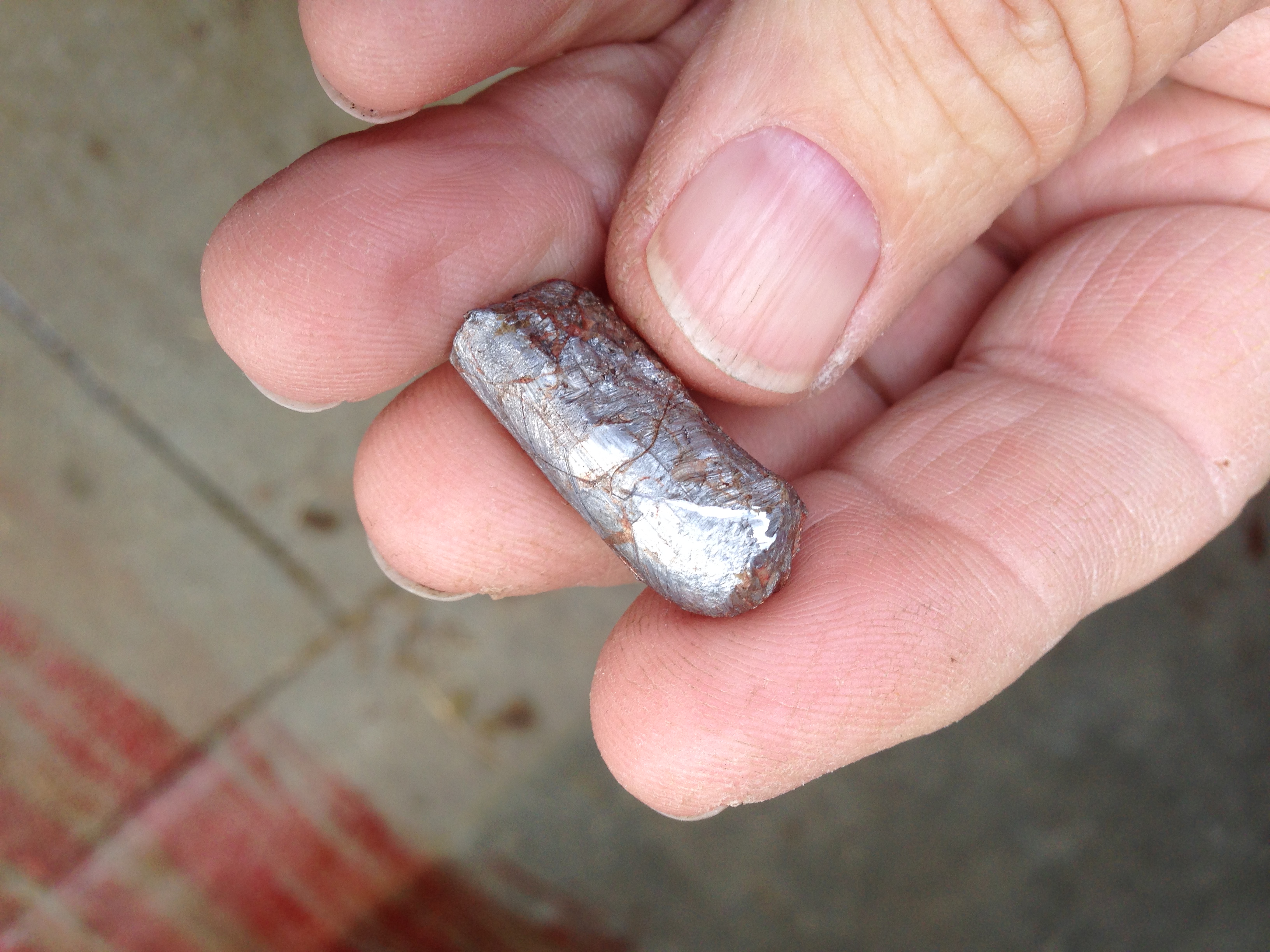 So, we have two similar size buffs shot with two calibers on the opposite end of the spectrum size wise, that penetrated almost 3/4 of the length of a mature cow buff. Distance was same, 100 yds. Bullet damage is similar. Bob can fill in details on his buff as far as bullet wt. retention, etc. This is why I say making any broad sweeping statements regarding bullets, calibers, in BPCR when buff hunting is difficult. These are not my theories, just actual observations, and why I maintain that bullet placement is paramount to bullet or caliber. Now I do think different bullet configurations, profiles, and alloys may react differently upon impact with bone and on thinner skinned critters, and Rdnck and some others have done some good experimentation in that regard. Both these bullets above impacted bone during their travel. FWIW hope that answers some questions about the .40's abilities on buff hunting.

These quartering shots, especially away, are tricky. You need to visualize in 3D. Most people don't hold back far enough for angle. This was Bob's second hunt and spend a lot of time shooting with him so know his abilities. Bill is an old friend who originally got me into Sharps and is one shot on all the buffs he has taken.. Brain shots are very effective and very tricky. I did not recommend them for my hunters. If you do elect to take them I would get in close. There is a lot of area on the head that is non lethal. I always recommended heart shots for my clients.

Yea, buffs will charge, especially when mortally wounded. Had a TV show with a couple hosts and two videographers. One guy made a just above the heart shot in lungs on nice bull. Went down and was just about expired when we walked over the hills to get to him. I recommended waiting just a couple more minutes before we approached and if not done we would do a coup de grace. Well the young videographer asked if he could finished him off when we went up. I told him yes, but stay back about 15 yards. Well we were still waiting and I was visiting with host filming and he decided to go on his own. Walked up to it and put the muzzle behind the ear. Before he got a shot off the "dead" buff opened his eyes, jumped up, and charged right after the cameraman! Well, he emptied his .44 revolver shooting back over his shoulder at the charging buff. The buff went about 30 yards and keeled over dead.........no thanks to the hits from the .44. The videographer got fired on the spot. I was not happy, nor was the host. If you have never seen a dangerous buffalo, you have not been around them long enough. An 81 year old buffalo rancher told me that when I was getting into the business. Good words to live by.