First hunt with my new to me Shiloh .45-70. Went to the Carson National Forest near Taos, New Mexico and spent 3 days chasing bears. Saw a lot of bears, ran after hounds for a total of a little over 12 miles through some crazy mountainous terrain at over 8,000ft elevation carrying a 10lb Sharps and a pack, and ended up catching up to this nice color phase guy on the last morning of the hunt after passing on a handful of smaller bears. If you’ve never hunted over hounds, the hunt is in finding a hot track, getting the dogs on it properly, hoping the bear gets tired enough to tree rather than just turning and fighting the dogs, and then hiking your keister off to get there before the bear gets a break and comes back down ornery again for another round or bolts on another merry chase to another tree or until the dogs get tired. We were in a spot where there weren’t a lot of roads, so there were some good hikes. Longest was two miles after a bear that ended up being too small for my taste. Taking the animal is potentially anticlimactic, or can be downright interesting depending on the bear, apparently. My hunting partner, who used new-fangled jacketed bullets and white powder, was charged by his wounded bear.

My bear treed about 1.5 miles up the mountain with almost 1000 feet of elevation change and the last 300 yards or so being a scramble almost on all fours to get up the hillside. We made great time—fast enough that I thought I’d probably die before I got there.

Shot was about 30 yards. First shot was a clean broadside double lung. I had shot number two into him about 5 seconds later for insurance, as it seemed like he was looking to come down, but on reviewing the video, he was expiring already and I didn’t need number two...however...it taught me a lot about cast bullet performance.

I put number two into the point of his shoulder, smashed the shoulder, and smashed his spine. That turned the lights out instantly, but I found that bullet just on the other side of the spine in the neck sinew. Only made about 16” of penetration, albeit breaking some bones. The softer alloy combined with a hefty impact velocity gave me a bullet expanded to well over an inch and retaining 445 of 480 grains. I’ll bump up the tin a bit going forward.

Front Paw with a can for size: 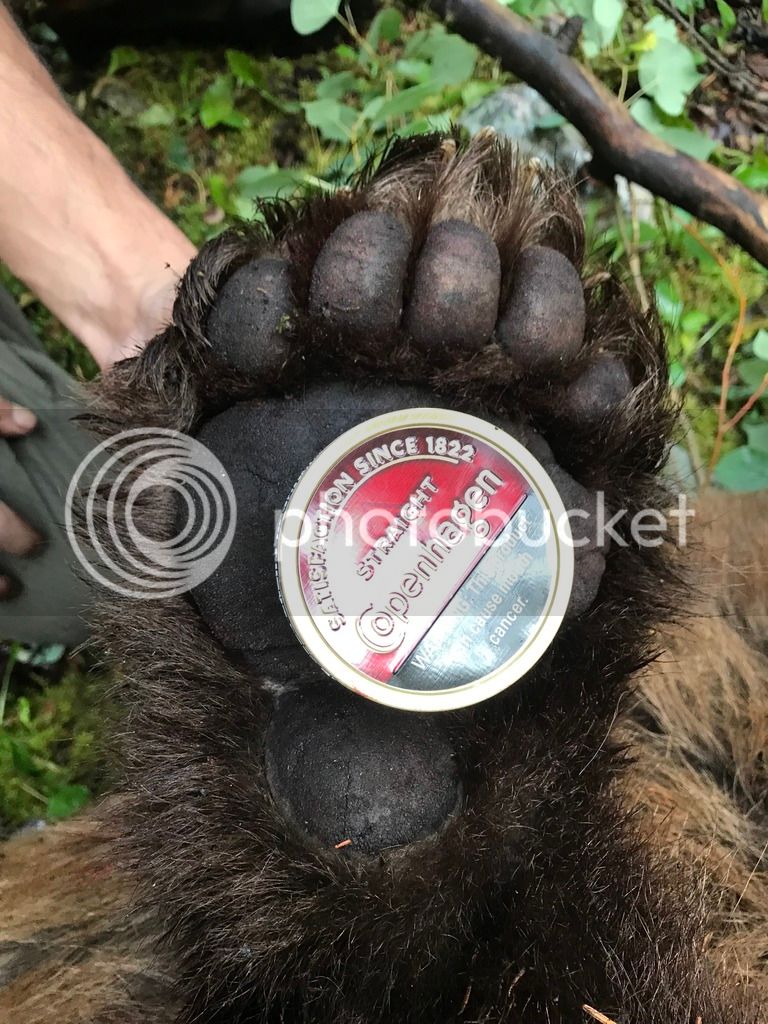 As an aside, I used an October Country lace on butt-cuff sling, and it worked out pretty well. I created a new hole up front to cinch the barrel loop down tight so it didn't interfere with the sights, and on the back, I put a piece of 3/8" closed cell foam against the military butt plate, covered it with a buttplate-wide strip of soft deerhide that overlapped the toe and heel, and then slipped the butt cuff over the whole arrangement. Really tamed the military butt for load workup. I don't have a pic, but I can take one later.

That is an exceptional bear! Congratulations on all counts. I think that cinnamon color phase is just outstanding. A 45-70 and cast lead bullets driven by black powder proves once again that it is the Real Deal. Great hunt, great adventure, and great bear. You will remember this one for the rest of your life. As the man said, "Welcome to the brotherhood of the bear". Shoot straight, rdnck.
Chairman, Phd
Caddo Lake Chapter
FES
Charter Member FBASS

Congratulations on a fine Bear. The 45-70 does it again

Can you post a picture of the bullet as cast? I take it the first round was a pass through?

Thanks Rdnck and Dan O.

I don't have a pic of just the bullets as cast, but I'll grab one tonight. Here they are patched and loaded, and it shows the nose well. The ones on the left are longer bullets from the same 2-cavity mold, and the ones on the right are the ones I used on the bear. It has one 530gr cavity and one 480gr. Yes, the paper may be a bit high on these, but they were parallel sided, and I figured better safe than sorry. I'm going to experiment with patch height as I have time. I get shredded confetti like this, so it probably isn't hurting too much.

Congratulations, thanks for the details. Helps to know the terminal performance of bullets and yours did the job well. Bullet placement means alot but failure to penetrate can be trouble, yours did it all. Thanks again for sharing.

I could do something like that. I've written a few published pieces. Where would I submit?
Top

OUTSTANDING! That is a very handsome bear, the best coloration. Please say there is a rug in the making?
Top

very nice bear. One day soon, I hope to have my own.
Top

Sarge wrote:OUTSTANDING! That is a very handsome bear, the best coloration. Please say there is a rug in the making?

Definitely! Went straight to the taxidermist. I'm having an open mouth rug done and they're going to clean the skull.
Top

Just got a call from the taxidermist, and the actual measurement is going to be over 7 feet nose to tail. That's going to be a lot of bear rug!
Top